To Be or Not to Be (mentally ill); That is the Question 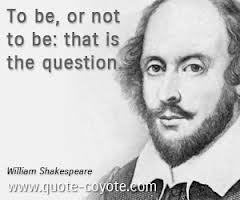 I probable drive everyone I know crazy about how I see my condition. I call it "bipolar like mind" here, a "mental phenomenon" over there, a "mental illness" in some cases, mental health disorder in yet other cases. It really is a case of "to be or not to be, that is the question".

You see, good reader, it truly is an dilemma for us "mental illness" people. You label it one way and people don't take it seriously, you label it another way and they read "too much into it". "Mental illness" conjures up all kinds of negative images of insane asylums past or acts of violence or of being not trustworthy and on and on. This is impossible to understand unless you've seen it from our view or have been in our shoes. And the kicker is that you probably won't take my word for what I'm observing because you'll subconsciously think - "he's not quite right in the head" and you'll value my views less than you would a "normal" person! It's kind of maddening, really.

But I've been furtively been taking notes and mental notes on how people view me and that together what other mental health issue people (note how I avoid the word "illness") and I am almost completely certain that people - even some people on the psyche ward! - change their behaviour towards me when I describe the extent of my condition.

So, from what I've observed from my own experience and what I've read in individual case studies, others will, a) outright reject or shun "mental cases", b) not outright shun but actively avoid them (make excuses to not get together or talk on the phone, etc.) or c) maintain some relationship but reduce the intimacy of the relationship, or a subset of c, d) tolerate but not get too close.

The labeling thing is a tough one and there are several things at work here. First is understanding just what a mental health disorder is. This is truly the toughest as even trained psychiatrists have trouble with what a certain person may or may not have. From the blog The Neuroskeptic;


"... now the talk has moved into a new phase, because the results of theDSM-5 ‘field trials’ are finally out. In these studies, the reliability of the new diagnostic criteria for different psychiatric disorders was measured. The new editorial is a summary and discussion of the field trial data.
Two different psychiatrists assessed each patient, and the agreement between their diagnoses was calculated, as the kappa statistic, where 0 indicates no correlation at all and 1 is perfect.
It turns out that the reliabilities of most DSM-5 disorders were not very good. The majority were around 0.5, which is at best mediocre. These included such pillars of psychiatric diagnosis like schizophrenia, bipolar disorder, and alcoholism.
Others were worse. Depression, had a frankly crap kappa of 0.28, and the new ‘Mixed Anxiety-Depressive Disorder’ came in at -0.004 (sic). It was completely meaningless."


I have many such quotes about the DSM-V and its predessor the DSM-IV but this one will do. What it does is tell us that not even the highest trained psychiatrists can reliably get diagnoses right. And this is the thing with mental health disorders. There are NO tests for them; not a piss test, not an x-ray or brain scan (though I put much faith in the future of brain scan technology), nothing. It's all based on observable "behaviours". So if the docs have trouble getting it right, and there are no tests, how is the general public supposed to know what we "have"?

This is the thing, you can't. And this is where it gets really tough for us mental health disorder peeps; no one understands us. This frustration is so great that it becomes, I firmly believe, part of our problem; we're suffering like the Dickens inside but nobody (save for a very few very empathetic and perceptive people) can "see" that suffering. We end up getting lashed by most of the public or friends or family even because they think we're just being "lazy" when we can't do something because of our condition. There's a part of our minds that is "disabled" and not working right. But those on the outside tend to see a perfectly "healthy" person. It's like having someone who was disabled with polio lashed because they can't run a marathon.

The term "mental illness" was meant to alleviate this in that it'd tell people that us "ill" peeps were suffering from a real illness - which we are. But the term is useless if the general public remains ignorant - and they, you, ARE very ignorant - of what mental health disorders are and how difficult they make life for those who suffer from them. Furthermore, the story (and it is a story) that mental illnesses are biological in nature due to "chemical imbalances" only makes the situation worse; people in polls, as explained here, have even more negative attitudes towards those with mental health disorders.

So this is the rock and the hard place we're in. Call it a serious illness and people have negative attitudes towards us, give it another term and people can't understand why we can't work for example or have days we can't work or why we have to go to the hospital sometimes.

I see I am already running to the end of my blog post word limit. I'll post more on this in a future post. I want to get more into the psychological impact of illness labels both good and bad.

In the meantime, mental conditions can be very hard to live with and societal blame and shaming is a big part of the problem. I trust that I am helping you, dear reader, overcome your ignorance (which I only use in the lack of knowledge sense of the word) and that you can learn to be more empathetic and encouraging to anyone you know who may be struggling with a mental health disorder even if it may not seem to be a "big deal" to you.
Posted by Bradley Esau at 10:53 AM