Bipolar and the Medication Conundrum - Introduction 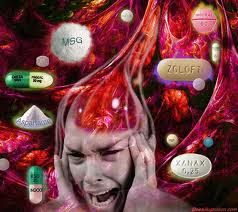 I'm jumping around quite a bit I realize but hey, welcome to the "bipolar-like" mind. I think evolution designed the bipolar mind to do this (yet ANOTHER topic for another day) and this is possibly a result of ADD being comorbid with bipolar disorder so our minds tend to dart around in a lot of different directions. Back in our evolutionary development when poisonous snakes, tigers, (or "lions, tigers and bears" to quote the Yellow Brick Road quartet) lurked in every possible bush and tree, this was probably a very handy thing. Today, when we often need to focus on single things and don't need to worry about a venomous viper slithering down our neck while we focus on cutting up that day's kill, it's often less handy. Or still handy (it can tend to give rise to a lot of great ideas outside the box as well). Anyway, we (us ADD addled bipolars) tend to jump around a lot for better or worse so here we are this afternoon on the conundrum of "to medicate or not to medicate".

When you're desperate for help, as I was in July of 2010, medication certainly looks like the way to go. I was highly suicidal at that point (having just survived my first psychotic episode and then all kinds of other ideation fun and games) and had found myself in my first stay in a psychiatric hospital. My mind was in such a tornado of chaos, I'd have given - or taken - anything to make it settle down and return to something I call normal. I'd have probably eaten Brussels sprouts if they told me they would help (you have to understand how much I hate Brussels sprouts to get the desperation in such an act). So when good Doc Babbage (as was his name) said the magic words ("yay!", I thought, "this mental chaos has a name! It's not just "me"!") and suggested lithium, I was all gung-ho. Put this toxic metal  in my body? Alrighty! I of course didn't know this at the time. I honestly wouldn't have cared at that time if it was battery acid they were telling me to take.

But in the wonderful world of mainstream psychiatry and bipolar disorder, lithium is just a "gateway" drug. Over the next thirty months I gradually found myself on various and rotating cocktails of lithium, Dovalproax (a mood "stabilizer"), Risperidone, Seroquel (atypical anti-psychotics), benzodiazepines (anti-anxiety tranquilizers), SSRI anti-depressants (selective serotonin re-uptake inhibitors) and I think some sleep medications thrown in for good measure. About a half dozen or so psychiatrists all had a hand in this. They know what they're doing so it's gotta be all good, right?

And this is certainly what the literature will tell you. Check any book, go to any website, talk to any doctor and they'll all say the same thing: bipolar can be treated with medications. The best outcomes are on medications. And so on. This is the official line, this is the common dogma. Oops, I shouldn't use a loaded word like "dogma". This is "conventional wisdom" then.

One of the first things I came across when I started researching bipolar was the link between it and suicide.As suicide risk is what finally drove me to get help (after years of going through manic/depressive roller coaster cycles), this was my biggest area of concern. One of the first things I discovered was a study done through autopsies of bipolar suicide victims' brains that showed a loss of brain tissue in the hippocampus, my first insight into the fact that bipolar disorder may cause actual physical - and damaging - changes in the brain's structure (and trust me, this did nothing to reassure me). I've never been able to find that study since but this has been born out in many other studies as well. To quote this one from Science Daily,

The study shows for the first time that bipolar disorder - a condition characterized by periods of depression and periods of mania - is associated with a reduction of brain tissues and proves that the changes get progressively worse with each relapse.

Well, this certainly shows what a serious illness bipolar is and that we should listen to the good doc and stay on the meds, right?! Or does it?

But here's the rub. In the thirty months I was a good boy and faithfully gulped down the handful of pills every night (with the exception of one ten day experimental break), I got much MORE suicidal rather than less. Furthermore, I suffered through the worst and longest depressive episode of my life while on the ever changing cocktails of drugs prescribed for me. Howe could this be happening? It was only after coming closer to death's door than ever before that I decided that perhaps I should take a little closer look into all this stuff I'd been shoving down the hatch on a nightly basis. So I started to do a little "poking around".

I quickly came across investigative journalist and science writer Robert Whitaker and then later his book Anatomy of an Epidemic. Whitaker has meticulously researched the psychiatric drug industry and long term outcome studies as well as following numerous case studies. I happen to have had the good fortune of meeting and having a lengthy discussion with Robert when he was in Vancouver to give a talk in February of this year. I found him to be genuinely sincere in his efforts to paint the most accurate and balanced picture possible. And that picture does not favour the drug industry or the treatment of psychiatric illnesses with today's classes of psychiatric drugs. Whitaker's account was extremely eye opening. Study after study after study show worse long term outcomes for patients on drugs than off of them. Most heart breaking were studies showing the effects of young children raised on psychiatric drugs.

But back to bipolar disorder and brain shrinkage (and this is true for sufferers of schizophrenia as well). Were drugs helping to stave off this damage? Well, it appears to be exactly the opposite. I've found a few studies that show the same results but I'll quote this one from Dr. Nancy Andreasen (which was done specifically on schizophrenia patients but the same anti-psychotics are used to treat bipolar so the same would hold true with them),

Q: And what you have found?

A: I haven't published this yet.(1) But I have spoken about it in public lectures. The big finding is that people with schizophrenia are losing brain tissue at a more rapid rate than healthy people. Some are losing as much as one percent per year. That's an awful lot over an 18 year period. And then we're trying to figure out why. Another thing that we've discovered is that the more drugs you've been given, the more brain tissue you lose.

Q: Why do you think this is happening?

A: Well, what exactly do these drugs do? They block basal ganglia activity. The prefrontal cortex doesn't get the input it needs and is being shut down by drugs. That reduces the psychotic symptoms. It also causes the prefrontal cortex to slowly atrophy.

So back to the other study about bipolar patients losing brain mass, is it the illness causing this or the drugs? The study doesn't indicate how patients were chosen or whether they were on drugs or if they were, for how long. But given what other research is finding, there appears a good chance that it's not the illness causing the brain changes but the long term use of the drugs prescribed to treat them.

So what we see here is that the use of drugs for front line treatment for bipolar (and other psychiatric illnesses) is not so clear cut at all. And this is just the tip of the ice berg. In future posts I'll expand on this and look into the links between suicide, violence, triggering manic episodes, addiction and SSRI anti-depressants, anti-psychotics and  tardive dyskinesia and how they may increase the frequency of psychotic episodes, and the addictiveness of benzodiazepines. And just for fun, we'll throw in good old ever popular Ritalin as well.

Mental health disorders and medicating for them is a big issue, an issue about which we've mostly gotten only a one sided story. Whether you are in favour of them or they're currently working for you or, like me, your condition worsened on them (and you may well be worsening but not be aware of it), it's my goal to explore the issues as much as possible, along with providing alternatives. And my case is far, far from unusual. Whitaker tracks psychiatric drug use back their introduction in the mid-fifties and finds astonishing links - supported by widely available data - that not only do tens of thousands of people may erroneously get caught up in the mental illness trap, but their conditions will drastically worsen while on the very medications prescribed to treat them.