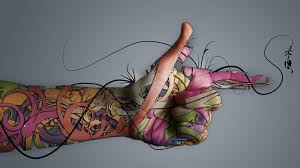 Lots of various thoughts that don't merit a full post on themselves.

I am a deep thinker and it's not possible to have been so tempted by death (or driven to it as I described in my series Bipolar and Suicide) and not think about what happens after death. And here is what I concluded happens after death - nothing. I am, as I've written elsewhere, purely an atheist and I look for answers to life strictly in the sciences, particularly of late cognitive neuroscience. Everything we are, you see, is in our brain. It's been said, by whom I'm not sure, that the body is nothing more than a life support for the brain and when the body ceases to function, when the heart and lungs stop supplying oxygen throughout the body, the brain will cease to exist and because the brain, and mind, are all of "who we are", when the brain stops, that it, "we" stop. There is nothing else. Any kind of "afterlife" is merely the human theory of mind at work or, if you prefer, the human over exuberant imagination at work. Or the myths that religions sell. All this is designed to make us feel better about death or, perhaps, make us feel better about life. It is "reassuring", I suppose, to think we're going to get another kick at the can in some sort of afterlife or that we're going to have some sort of "life after death" and get to see all the dead ancestors that we dearly miss (presumably the ones you don't miss will be in hell). Much of what you "believe" will depend on whether you believe in a loving God or a punitive one. I'm delightfully free of believing in either.

All of life is here on earth. Is there any need for more than that? It's beyond me why people would want anymore than that but then I've had a very good life. For those not satisfied with their time on earth, I can see wanting - hoping for - something better after they leave (yes, yes, I can see the irony in my being suicidal and in saying that I've had a good life ... it's an odd thing for sure). Anyway, when the lights go out - when your heart stops supplying blood to your brain - that's it; it dies like any other organism and because "you" die along with your brain, there is no "you" to observe what happens after death despite what you may be led to "believe" by movies such as Ghost, A Sixth Sense, Contact, and countless other movies and books and not to mention all the religious tripe. I know, science isn't very sexy or romantic and a rather a drab stick in the mud on the whole thing but there ya go. Personally, I prefer to think we're all just a part of nature and die like anything else in nature and that our bodies return to the soil just as any other biological organism (the latter half of ashes to ashes, dust to dust except for the former parts of each of those clauses, IE; just the dust part) but that's just me.

After this last go around in the hospital and dealing with the doctors and nurses and pharmacists again, I'm more convinced than ever that we're a good fifty years or so away from truly understanding mental health disorders and treating them properly. Despite what I presented on what I'd found about the damaging effects of many of the drugs they were proposing for me and despite pleading that my present problems were strictly psychological in nature, they still roboticly spouted The System line: "you need the medications to get better". Though I repeatedly told them I did not get "better" on their medications but got worse, they still just recited rote System propaganda. It was beyond frustrating.

And speaking of frustration, one of the things about being "mentally ill" is that no one takes your word for anything any longer. You see, because I - we - are "mentally ill", we couldn't possibly be right in the head and thinking straight and so people tend not to trust what we say. This was especially so in the hospital even with fellow patients. Whatever I argued about my case, my words were not heard because it was the "sickness talking" or what could I possibly know, I'm a patient in the hospital (being in the hospital certainly didn't lend much credibility to my claims that meditation was my main tool for getting better). If you are reading this, and have read my previous posts, there's a good chance you'll subconsciously question the validity of what I'm saying because I'm "sick". This is pretty broadly the experience of many people with mental health issues and it's certainly my experience. People - non-mental health issue people - will deny that they do this, but they do; it's just that it happens, as 99% of our stuff does, subconsciously without our conscious knowledge.

Further along the lines of what I talked about in the posts on To Be or Not to Be about whether one is mentally ill or not. One thing I touched on was the inability to diagnose a mental illness by any physical means. This also means that the sufferer can point to no medical evidence of being "ill". Right now, for me, I am unable to work due to the long term effects of to a smaller degree my illness and to a larger degree the devastating effects of stress on the mind and body. But there's nothing to point to, no one thing to tell, to indicate my "state" to people. I "appear" to be fine so people assume I'm fine. There's no cast or anything to point to to say that "hey, this part is broken so I can't run a marathon just now". Very frustrating, I guarantee you. As well, people point out all kinds of miracle recoveries as "inspiration". That's cool, and I read those too, but here's the thing; the number one thing that you need to recover from an illness or injury is a strongly functioning brain. And here's the thing with recovering from a mental health disorder; your brain is part of the problem; it's broken (somehow, no one knows how ... further frustration). And here's further the thing; the drugs they put you on are a big part of the problem; they shut down  certain functions. So to get better, you need a healthy brain but your illness is that you have a malfunctioning brain and to "fix" your malfunctioning brain they put you on drugs that cause further malfunctions. All jolly good fun, what?! Uuhhmm, no.

I don't believe in drugs to get better. Been there, done that, got the suicidal t-shirt to prove it, thank you ver much. I believe in meditation and other mind techniques that have their footings firmly rooted in bleeding edge neuroscience. That plus just getting my life sorted out so that I don't have so many stressors.
Posted by Bradley Esau at 11:55 AM