Table of Contents and Reading Guide for Taming the Polar Bears 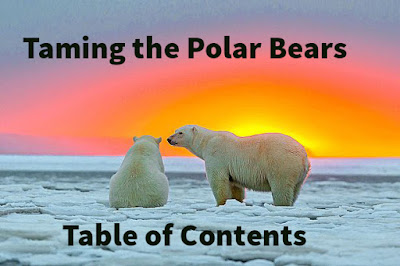 The sole (soul) reason I exist and write this blog

The Neuroscience of "You"

When three years ago I started looking into better ways to understand mental health problems and disorders and why people have such problems overcoming their disorders and improving their lives and inner mental states, it became very clear to me that we needed a better understanding of how our brains work and why.

A brief and fun look into some of the basic brain anatomy and neurobiology that makes up an individual, all of which "sets the table" for later chapters to come. Since originally writing this in the fall of 2013, I've received a great deal of enthusiastic and sincere endorsements of from laypeople to those from the fields of psychology to neuroscience itself.

at the Evolutionary History of the Human Brain


For reasons I can't quite fathom, most professionals in the study of human behaviour somehow either overlook how the human brain evolved or inexplicably don't think it's important. This is a gross oversight in my view (and I am not alone in this view). At any rate, this chapter is a very brief look at the history of human brain evolution. Understanding our evolutionary past can also greatly aid in understanding modern human behaviours and what we'll call for now "brain difficulties".

We are our brains. This chapter begins to look at some of the factors that are at play in developing a given brain or "you". While both genetics and environmental factors are important, of course, starting in this post I argue that it is environmental factors that either trigger genetic pronation towards a given disorder or psychiatric condition or alter the brain's development in such a way as to give rise to various mental health disorders.

Furthermore, in a future post (or series of posts) I will argue that there may be absolutely nothing wrong with a particular person's brain but that the mental anguish and suffering may be on account of being stuck in an environment that is unsuitable to that person's core personality, character and emotional needs.


Something that is very hard for people to wrap their heads around is the fact that our brains "create" what we experience as "reality". Which is not to say that the world around us is not real, only that our individual perceptions of it are not exactly or necessarily "real" and that much of what is in our heads is not "real". While this would appear to have nothing to do with mental health problems, in fact it lays at the very crux of most of them. Understanding the concept introduced here is very important for when we start looking at cognitive distortions, delusional thinking, hallucinations and other factors involved in any one case of a mental health disorder.

"Zombie programs" is a term coined by the neuroscientist David Eagleman in his book Incognito which he uses to refer to the vast and enormous numbers of neuronal circuit programming that hums away below our conscious awareness controlling all of our physical movements, thoughts, feelings, beliefs, actions, decisions and so on. When I talk about our "subconscious" running our lives (as I do repeatedly throughout this blog), this is for the most part what I am referring to, not in the Freudian subconscious sense (which is what will generally spring to most people's minds when they hear the term subconscious). What we are experiencing consciously is but a very small fraction of what's going on beneath the surface of our minds. In this chapter I begin my argument that much of what goes wrong with those of us with various psychiatric disorders is our deep autonomous programming running faultily.


Chapter Six: An Introduction to Neuroplasticity

Far and away the most important discovery of neuroscience in my view is the concept of "neuroplasticity", the brain's ability to reform connections and networks in response to internal to physical injury, to both internal and external events and mental and physical demands.


Chapter Seven: An Introduction to Stress

and the Stress Response System


Part one of a series of essays on the neuroscience of the stress response system and the importance of its role in psychiatric and mood disorders.


Everything I do and teach pertaining to better mental health is based on neuroplasticity and retraining our brains. These are the basic fundamentals that can help you or anyone do that.

The original post needs some rewriting and brushing up again but it still stands up well as an introduction to the basic fundamentals to better mental health, resilience and improved mental outlooks and in the end, an improved life.

Gratitude and compassion are two age old concepts and practices for taming our minds (or polar bears). I introduce and talk about them in this post.

One of the principles of neuroplasticity is to have regular ways to stimulate specific brain regions (and de-stimulate others). I devised my own approaches to working on better mental states, problem solving strategies, correcting negative self-talk and attitudes and so on. I introduce the principles of the approaches I developed in this post.

An Introduction to Music Therapy

An Introduction to Meditation

An Introduction to Mindfulness Meditation CBT

An Introduction to Belief

(other disorders to come)


Bipolar Disorder, the Brain and Energy - Part I

The psychiatric and medical establishments miss vast areas of the psychological impacts of our disorders and how our minds are impacted by those. I attempt to address that in these (and more to come) posts and essays that don't fit the other categories.

The Psychology of Bipolar - Frustration


The Why of You - the Emotional You

Essays on the Mind

On Consciousness, Thoughts and Meditation

My Story, Personal Experience and Perspectives

Psychosis, Psyche Drugs and Crumbling Sense of Self - Part One

Welcome to My World


Weird Scenes Inside the Goldmine - Cops and Cuffs


The Mother of all Manic Depressive Cycles

Random Thoughts on Being Bipolar, the Brain and the Blog

In Praise of Quick Fixes for Depression and Other Disorders


Mania and the Story of Icarus and Daedalus


The War Over Our Minds and We the Victims


On Psychiatry and
Pharmaceutical Drugs


Through a relatively brief period of personal experience (only thirty months along with two briefer periods in the summer of 2013 and the winter of that year) and through enormous amounts of extremely in depth research, I discovered that the psychiatric industry is wildly and tragically inept at understanding, diagnosing and treating any psychiatric disorder. Furthermore, that in alliance with the pharmaceutical industry much of what they do is designed - in a very literal, and very well documented sense - to create life long consumers for psycho-active or neurotropic drugs.

I wrote at great length about this in a now abandoned manuscript back in 2013. I'd hoped to get to outlining more about the false claims put forward by these two groups (the American Psychiatric Association (and their counterparts throughout the Western world) and pharmaceutical industries) but it's an enormous task and I decided instead to focus on what I found instead to be going on in psychiatric disorders and positive ways and approaches to understanding them and working through and even past them.

I did write briefly about both, however, and I'll include some useful links for further reading.

Psychiatry - the Emperor with No Clothes

The Myths of the Benefits of Psychiatric Drugs


There is much more material to be added, but in time.

All the writing and research is done by a single individual - Brad Esau - who himself has been disabled due to the long term effects of his condition and who lives on a very minimal pension and thus has great difficulty supporting himself.

For a one time donation, you can simply follow this link and instructions there - https://www.paypal.me/TamingThePolarBears

Don't have a PayPal account? No worries, getting one is fast and free.

Your donation goes to a fund controlled by a third party team who support Brad and his Taming the Polar Bears project (Gregory Esau is his brother and the fund bank account is in his name).

Or if you'd like to make a regular small monthly contribution, please contact this email address - lanina1101@gmail.com - and include in the subject line: monthly donation with the amount you wish to donate on a monthly basis.

Please state your PayPal address and name in the email.

Thank you so much for your support from the Taming the Polar Bears team!