Evolution and Suicide - Part One 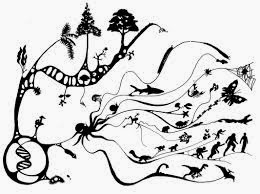 
All my interest and research into mental health issues began with a single question - why?

I wanted to know why I was driven to take my life. I've been through many episodes of high suicidal risk and none of them felt particularly under "my control". None of them particularly felt like a "decision" by "me". It for all the world felt like a deeper drive than that.

So I simply wanted to know why that was. I simply wanted to know "why?". My search for the answer to that simple question took me through somewhere around a million and half words worth of science books and research papers. I explored every field of science there is that's related to human behaviour from genetics to evolutionary psychology to social sciences to the science of addiction to neurobiology and to neuroscience itself. As ALL behaviour originates in the brain, thus neuroscience provides the best answers to questions regarding human behaviour. So I spent considerable time and effort studying neuroscience. As genetics and environmental conditions shape the brain, I explored those two fields a lot too.

While I became very, very interested in ALL aspects of mental health, my biggest interest was in the science of suicide. After all, that is by far the most serious consequence of a given mental health disorder.

The following series explores one possible explanation that I found. It's just a theory of course but I think it's a very good one. It's based on solid science and something most people don't get to study - what it's like to have this drive within oneself.

This series is a rough draft for now. I hope to one day flesh it out more and include all the proper citations.


The Evolutionary Basis for Suicide


Almost everyone will experience emotional pain in their lives. (1) Sociopaths and psychopaths are exceptions (definitions of these vary but the basic point is that they don't feel emotions and especially empathy and empathetic pain like most of us do).

Many people who commit suicide do in response to acute or chronic emotional pain. But if almost everyone experiences emotional pain, what makes the pain of suicide victims different? Is it that much worse?

I've spent a lot of time talking to people about emotional pain or hearing or reading their stories. I've talked to numerous street people and heard their stories. I heard many stories during group sessions in the hospital. There are a LOT of VERY painful stories out there.

What makes one person's pain more severe than another's? This is virtually impossible to quantify. One person seems to be able to bear unfathomable amounts of pain and carry on. Another person gets diagnosed with PTSD after the death of a cat.

This is an extremely hard question to answer (and no, you don't have the answer). I have seen and come up with some good possibilities though.

One of my lifelong interests is the study of evolution and how all that works. I accept that all life is shaped by evolutionary forces. This has been demonstrated on so many levels under so many conditions that it is really beyond doubt. All that is in doubt - and which is the never ending subject of debate among those in the field - is the precise mechanism for this or that present day feature (like homo sapiens' vaunted frontal lobes or a particular wing design on a certain species of bird and countless so on). The thinking among the leaders in evolutionary theory (evolution itself is not a theory but the processes of it are) is that nothing exists without an evolutionary basis. If it exists today, it exists for a reason. If it exists today, that means it survived the millions and millions of years of evolutionary grind (which is not to say evolution won't eventually grind out of existence many of today's "features" if conditions change).

All things evolve to adapt and any given feature of any given species today will have evolved to either adapt to something or for purposes of genetic diversity (a very key and basic element of evolution often overlooked. A lot of what is passed on through genetics may not have a discernible purpose for current conditions but is there in case of differing conditions that may arise. In other words, some sort of change in environment conditions could trigger that gene into expression).

So if one accepts this as true - and I do (and I've not seen any convincing arguments to the contrary) - then one has to look at suicide in this light. It must be here for a reason. In the world of evolution, all animal behaviours have a reason. Or had a reason at one point (and its present day redundancy hasn't been eliminated by adaptive evolutionary forces yet).

Evolution grinds out the weak. That's what it does. Present day bleeding heart liberals can get themselves all in a tither about that but the relentless forces of evolution could care not a fig for such baseless sentiments. Evolutionary forces will grind on regardless of our pathetic little efforts to stop them.

And so it is, I believe, with suicide. Those that commit suicide are the weak and the inner drive is one of evolution's neat little tricks to cull out the weak.

I don't think one can understand genetics and deny there is a genetic component to something. Evolution works through genetics. Evolutionary "features" are passed on through genes. Not all genes will necessarily be "triggered" into action though. The basic ones that make up our physical features and most brain features will but a great deal need some sort of environmental trigger to activate them. People with a genetic predisposition towards heart disease, for example, won't necessarily get heart disease; there needs to be certain environmental factors (or the power of belief in their own mind might well do the trick).

So if we accept that there is a gene for every conceivable and possible human condition (and we should), then there is a "suicide gene". It won't necessarily kick in but certain environmental factors will do just that. And those factors will involve stressful situations (things that trigger the stress response system). Each individual's response to stress will itself be genetically determined. Genes decide how much or little one responds to a potentially stress triggering situation. So put together a highly sensitive stress response system and a suicide gene and you've got the potential for a self inflicted death.

Further on genes and genetic expression; it has recently been discovered that DNA does NOT, as has been the belief all along, stay the same throughout its carrier's life. People's DNA can change through the course of their life. It's a pretty big discovery and it's completely thrown for a loop a lot of science based on the previous notion that DNA was "set for life" (including the science of DNA identification). Why does it change? For the simplest of evolutionary reasons, I'd wager - to adapt. (and if one understands and accepts the basics of evolutionary adaption, that DNA would "adapt on the fly" makes perfect sense).

What this means in our case here is that if you didn't start out life with a suicide gene (or DNA), then you may well develop one as life's conditions kick you this way or that. It also might mean you develop more beneficial DNA but we're looking at suicide here and the downsides of this changing DNA. Or why such a gene might have an "upside".

The reason I bring up this seemingly trivial bit of recent scientific discovery is that it's particularly relevant in my case.

For those of you who are not aware, I have a genetically identical copy of myself. Identical twins are the only humans on earth that start out with identical DNA. This is because the fetuses of "identical twins"  are the result of a single fertilized egg splitting in two and two different life forms growing from that single split egg and thus having an absolutely identical string of DNA. This is in contrast to fraternal twins who develop from two separately fertilized eggs and thus quite different DNA. Each egg and each sperm carries slightly different DNA. Which is why every single solitary person on earth and in the history of earth is different. With the exception of identical twins. Which is why identical twins are so highly coveted by science for genetic and environmental research.

I respond very severely to environmental stressors. I have been highly suicidal and driven to suicide. I experience bipolar far more severely.

If my twin and I started out genetically identical (and this is beyond any dispute), why do we react so differently to life now?

The answer is twofold.

One is that though we have identical genes, not all of them will be activated in either of us. That is up to environmental conditions. And since childhood, we have experienced different environmental conditions (this alone requires almost book length examination though I touched on this in my post on Genetic and Environmental Factors in Brain Development). These differences greatly accelerated following high school. The big difference is that I ventured out and explored the world and he stayed close to home and stable in one field of vocation. So our differing environmental experiences would be a factor.

Two is this recent discovery of DNA "changing on the fly". DNA expression happens on the cellular level. Stuff is going on at that level all the time. And now it appears that DNA itself is changing, all in response to environmental conditions. So as cells replace themselves, they may well do so with a somewhat different DNA code than the previous generation of themselves. As DNA and cells change over a lifetime, so "we" change. Simply put, my twin and I are likely not genetically identical anymore. Which means that not only will our environments be different, we'll respond to environmental conditions more and more differently.

And on this model I appear to have "adapted" to eliminate myself (potentially ... the deed is obviously not done yet).

This leads to the question of "if evolution is a drive to survive, why would a suicide gene have survived?". "Or, on the new understanding of DNA, why would it have developed?" Which are excellent questions.

Much Daniel Dennett and Richard Dawkins

Many books and research papers on neuroscience

I hadn't read this since originally writing and posting it a year and half ago. I was in a pretty dark place when I conceived of and composed this, having just recently being discharged from yet another hospitalization to remove myself from danger. Yet rereading it now, it still holds up strong and I have seen nothing in the interceding time since my original writing to change any of the foundations for my theory and in fact would say that I have only accumulated more evidence (and I may at some point flesh this out further).

I can say that I have moved considerably away from being tortured by this "self-cull" self-destruct drive. It's still there at some times, which I touched on in Random Thoughts on Bipolar and the Inevitable and its follow up companion piece but overall I continue to improve many aspects of my mental health and outlook towards life.
Posted by Bradley Esau at 10:39 AM No comments: